Today was the first of the Scratch Workshops in Aberdeen as part of the upcoming Sound Festival.  The workshop was preceded by a screening last night of Ian Helliwell‘s short audio-visual works as well as my own Orphans series.

Today’s workshop was led by Mark and Jo from OKO Lab.  Working directly with 16mm film – some blank, some “found” – participants were able to create their own experimental audio-visual works.  A variety of lo-fi techniques were explored including scratching and drawing upon the celluloid and optical sound strip, splicing and producing loops.  All the results were combined to produce a single projected film. Some still images below – click to enlarge:

The next workshop will explore accessing digital online archival footage and editing “found” film together.  The final workshop will be devoted to producing a soundtrack to the films created during the previous sessions.  The final results will be screened as part of the Sound Festival at the Belmont Picturehouse on the 3rd November from 7.15pm.  The event is free – all welcome!  Further details here: 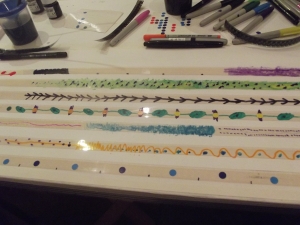